What is the best sleeping position?

According to the ancient Ayurvedic practice of Vastu Shastra, you should never sleep with your head facing north.

Vastu Shastra is the science of living harmoniously with prosperity through the energy of the living space.  Feng shui’s roots are most probably to be found in Vastu Shastra, but it’s more well known in the west.

In my study of Ayurveda and sleep I discovered the science of sleep direction according to Ayurveda.

Hindu’s custom is to lay a corpse waiting for cremetion with the head pointing north.  They believe that north is the direction that the soul takes when it leaves the physical body. It is considered an improper direction for the head when sleeping and could cause nightmares and sleep disorders.

If one sleeps with the head toward the north, because the north of the earth is positively charged, like the head of the human being, the two positively charged magnets will play havoc with the mind.  You certainly won’t get a restful nights sleep and likely to wake up exhausted from the unconscious war that’s been going on all night long.

This magnetism is understood, Ayurvedically, to affect blood ciruculation, stress and cause disturbance of the mind.

Vastu Shastra warns that if you sleep with your head to the north you may experience emotional instability, weak willpower and other illness.

“Sleeping with your head into the north draws energy out of the body, disturbing body-mind-spirit integration.”

Another point to consider is the Hindu god of death, Yama.  Yama rules the southernly direction. Yama is seen with a noose in one of his hands for catching his victims!  If your head is north when sleeping, when you sit up in bed in the morning, you’ll be face to face with Yama, the god of death!…Another good reason not sleep with your head north! 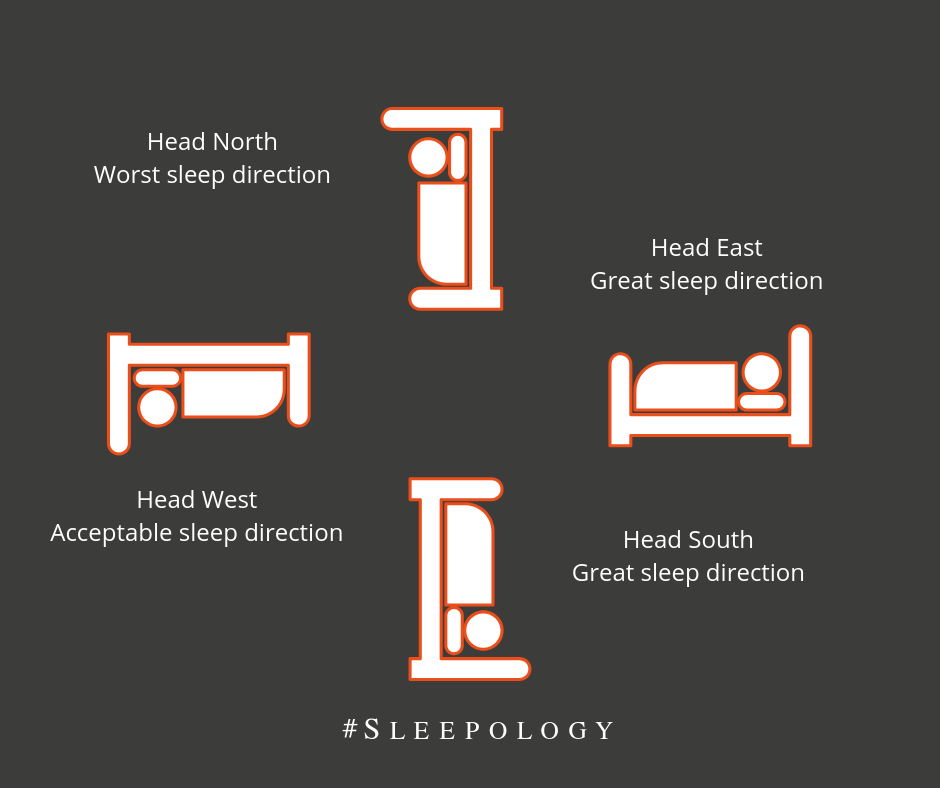 East is the preferred sleep direction, especially if you’re using your brain for learning and need to nurture your memory!  With your head to the east, it is said to improve concentration, promote meditative sleep and very good health.

Sleeping south is considered the direction of deep, heavy sleep.  As South is negatively charged and your head is positively charged, there is a harmonious attraction between your head and the direction.  Instead of energy being pulled out if you sleep with your head to the north, energy is drawn into your body promoting health, happiness and prosperity.  That means you should sleep like a log with your head facing south.

If you’re not sleeping well, try changing the position of your bed and see what happens.